I went home from our Spring Greens tasting this week, wide awake and alert, as I generally am after our tastings, and with a plan to write a new blog about the teas we tasted. In the event, I felt too tired, and went to bed, only to be lying there hours later, wide awake, caffeinated, but to snug to get up and start writing, and knowing of course that if I got out of bed, the Beast from the East was going to be out there to get me!

So, chaotic start to the tasting, because of the weather and change of plans etc, but we had two guests, both quite experienced green tea drinkers.

The teas I had planned for this evening were some classics, three Chinese and one Japanese, and then as usual, guests were able to try whatever else they fancied.

First tea up was the Organic Imperial grade Jasmine Pearls, which is a first flush green tea with jasmine flowers. This is a Spring 2017 harvest tea, which we brewed in a glass teapot, to allow the pearls plenty of room to expand out as well as up. 85°, for 20 seconds initially, gradually increasing the brew time with each subsequent steep.  The first steep was if anything, a little heavy on the umami flavour, but that was my fault for a slightly too long steep, but the intense jasmine flavour made up for that. The fresh delicate floral aroma I think was an experience for the two guests – even though one of them had already bought this tea. She said that she was getting new flavours with this brewing than she wasn’t getting at home. The liquor had a pale pink tinge to it, which doesn’t come over in the photo. The mouthfeel is soft, with very little astringency.

The second steep was again delicious, with a peachy aroma, along with the jasmine. We went on to have another two steeps after this, becoming more alert and refreshed with each cup!

The second tea of the evening was the Japanese classic, shade grown Gyokuro. For the last 2-3 weeks before picking, the tea is covered with a shade of bamboo, which encourages the plant to produce more chlorophyll, which in turn means that the tea contains more theanine, the feelgood compound. Gyokuro is a stunning dark green thin leaf, a real high quality tea, spring picked and carefully processed. Having watched the Mei Leaf Youtube video on how to drink gyokuro, I decided to introduce our guests to the more unusual ways of brewing tea. This one we brewed first time at room temperature, for 15 minutes. The liquor was thick, viscous, an amazing bright citrine colour, with a most unexpected flavour. Yes, masses of umami, but also a freshness, grassy, buttered spinach, buttery green vegetables, kale, were all words used to describe the flavour. We tried it again with water at 50°, and the flavour was smoother, lighter – unexpectedly! Third steep at 70° was again fresh, still thick and viscous. Absolutely delicious tea – we finished this one by tasting the leaves – which were unexpectedly mild – said to be very tasty with freshly squeezed lemon and light soy sauce! 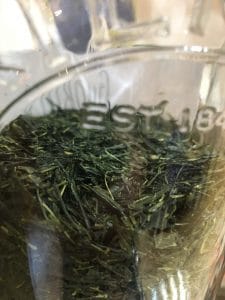 Third tea was Long Ching Dragonwell, much much nicer than the Dragonwell we had in the shop before which I thought tasted fishy, but it may have been my inexperience of the umami flavour. Anyway, this one is beautiful, fresh, vegetal, but with an aroma of peach on the second infusion, more of a flavour of beach walks. This had more astringency than the other teas, but that astringency that becomes sweetness in time. We brewed this Grandpa Style, in a long glass, to allow the leaves room to brew, and so we could see the leaves absorb the water and give off their flavour. 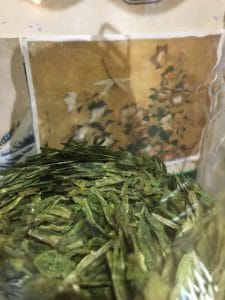 Last green tea of the tasting was an unusual tea, but one which is great for newbie green tea drinkers, and we discovered just why it’s so good. Tai Ping Hui Kui is grown in Anhui Province, this is a huge leaf, longer than your average Siniensis leaf, hand processed, which is what makes it expensive, flattened between sheets of parchment or silk, and rolled until flat. in the second of the pictures below you can see the weave of the fabric on the leaf. The darker patches on the leaf are where there is more than one layer of leaf – the bud and the leaf pressed together. Because of the size of the leaf, I brewed this Grandpa Style again, long glass, 75° water, less than 30 second steep. Delicate flavour, floral, fresh, fruity, so unexpected for a green tea. We brewed it a second and third time, and it remained delicious, gentle. 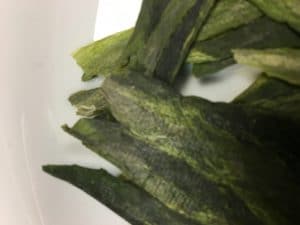 We brewed it a fourth time, but as usual, got distracted by other teas and tea stories, and one of the guests hadn’t heard of Pu-erh, while the other used it daily to enhance his work. I’m very enthusiastic about Pu-erh, and am always keen to share a pot, so this is what we did, tasting the 2005 Yue Che Yue Xiang a couple of times. We then remembered about the fourth steeping of the TPHK, and not expecting much, tasted it again – wow! Superb – no bitterness – considering it had been steeping 30 minutes! The delicate flavours were all still there, the cool water allowed us to taste all the nuances of the tea.

Enthusiastic about the teas we tasted, I decided to write the March blog about the teas, and was planning to stay up writing … but that didn’t happen.