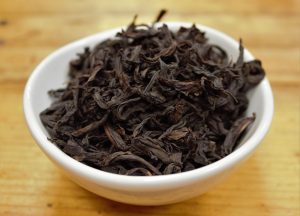 Da Hong Pao is a dark, heavily oxidised oolong, picked from old bushes growing on Feng Huang Mountain in the Phoenix Mountains in Guangdong province. This is a classic Dan Cong tea, and is my all time favourite tea (maybe).

Traditionally the most expensive tea you can buy, prices went through the roof a few years ago, but by buying direct from the farmer we manage to keep prices more reasonable.

The story goes that a scholar who was on his way to the capital to take an imperial examination got seriously ill and was forced to stay in the Tian Xin Temple where Buddhist monks helped to restore his health by giving him some of the local tea. The scholar went on to pass his exam, some say he was the best, some say he was actually the only one to pass the imperial exam and for this he got a large red robe. To thank the monks for their kindness he presented them with the large red robe with which to cover the tea bushes and thus the tea received its name.

Another legend tells the story of the mother of a Ming Dynasty emperor who got sick while travelling, and was healed by drinking this tea. To show his gratitude, the emperor sent large red robes to cover the bushes from which the tea was taken.

Tradition has it that there were 5 original bushes still in existence, because they had been protected by the red robes donated by the emperor.

Whatever the story, the fact remains that this is a delicious, richly flavoured oolong, a real treat