A good introduction to green tea, produced in Zhejiang province of China. There are many theories as to how it came by its Western name – was thought to look like gunpowder, but the more likely origin is that the Mandarin Chinese phrase for “freshly brewed”, gāng pào de.

The origin of this tea dates back to the Tang Dynasty, it was introduced to Taiwan in the nineteenth century. Much of China’s Gunpowder tea is exported to North Africa because it is a basic ingredient in north African mint tea (see also our Marrakech Blend)

After picking, the tea is withered, steamed, rolled then dried, resulting in less damage so they can be aged for decades if roasted occasionally and they were traditionally hand rolled!

The flavour varies according to where it’s grown – Pingshui, Taiwan, Ceylon.

Remember with Gunpowder Tea that you need less tea than you would normally use, as it will expand during brewing and you’ll find that you have far more than you intended! 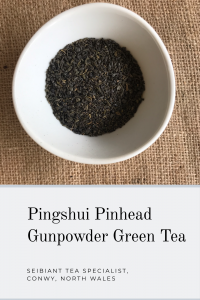