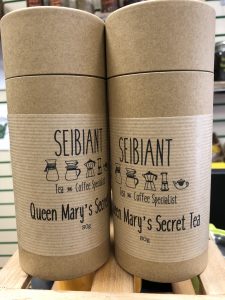 A gentleman came into the shop asking us to solve a mystery. He and his wife used to drink what they called Queen Mary’s Darjeeling, over 25 years ago, but hadn’t been able to find it for several years. It used to be made by Twinings, but that was all he could tell us. Now we love a mystery, so set to to find this elusive blend, and there’s actually quite a story behind this tea.

It was indeed Queen Mary’s favourite tea,  which she kept locked away in a cupboard, and is a blend of Keemun and Darjeeling, which was launched in 1916 and only discontinued in 2007 – which explains why he is unable to find it.

The tea was described as having a muscatel flavour, with spicy undertones, so we blended our Margaret’s Hope Darjeeling with Keemun Gold, which has resulted in a lovely tea.