This lovely smoky blend is a combination of an Assam, a Lapsang Souchong (to give that smokey hint of the camp fires) and a light, bright Sri Lankan tea.

During the Czar Nicholas’ time, tea was the most important drink – after vodka! Bright flavoury teas are still in demand in Russia, as the tea is reported to be often allowed to simmer and steep all day (hence the traditional Russian Samovar for serving tea)

The history of Russian Caravan Tea goes back hundreds of years. In the city of Xian you can see the historical marker which denotes the beginning of the Silk Road, which was the trail  which led from central Asia over the Caucasus and along the Black Sea. One of the commodities transported was tea.  Although Russian Caravan is Chinese tea, its name originates from these 18th century camel caravans that facilitated the transcontinental tea trade from tea-producing areas (namely India, Ceylon and China) to Europe via Russia. “It took at least half a year to make the journey along the Siberian route from the Chinese border to Russia, and the voyage was harsh. Traditionally the tea took on the smell of the camp fires during the journey”.  Imagine now the starry nights on the plains of Asia, en route to the opulent courts of St Petersburg, the tea you are sipping, warming you while you try to ward off the cold bite in the night air is this Russian Caravan. Today of course, tea is transported by road and rail. But, hey, tea is perfect for our romantic, aromatic dreams. 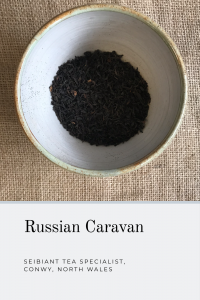