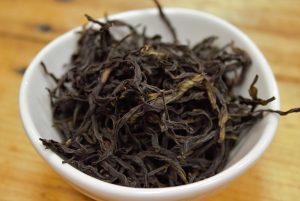 This exceptional Dan Cong is called Ya Shi Xiang. It translates literally as “Duck Shit Aroma”.  Ya Shi Xiang Dan Cong is characterized by its particularly fruity aroma which is underlaid with a subtle fragrance of flowers. This type of oolong is also called Phoenix Dan Cong and can be infused several times.

We buy this tea direct from the farmer from Chaozhou Tea Farmers in Wudong village, who grow their tea on the Feng Huang mountain, in the Phoenix Mountains, Guangdong Province. This particular farm has been farmed by the same family for 60 years. Because of the distance from urban centres, there is no pollution to impact on the tea bushes.

The name, Ya Shi Xiang, means Duck Shit aroma, and tradition has it that the farmer was tired of his tea being stolen regularly, that he started a rumour that he was spreading duck poop on his tea fields, and the tea was ending up tasting of said fertilizer! I guess you have to try it and see 🙂